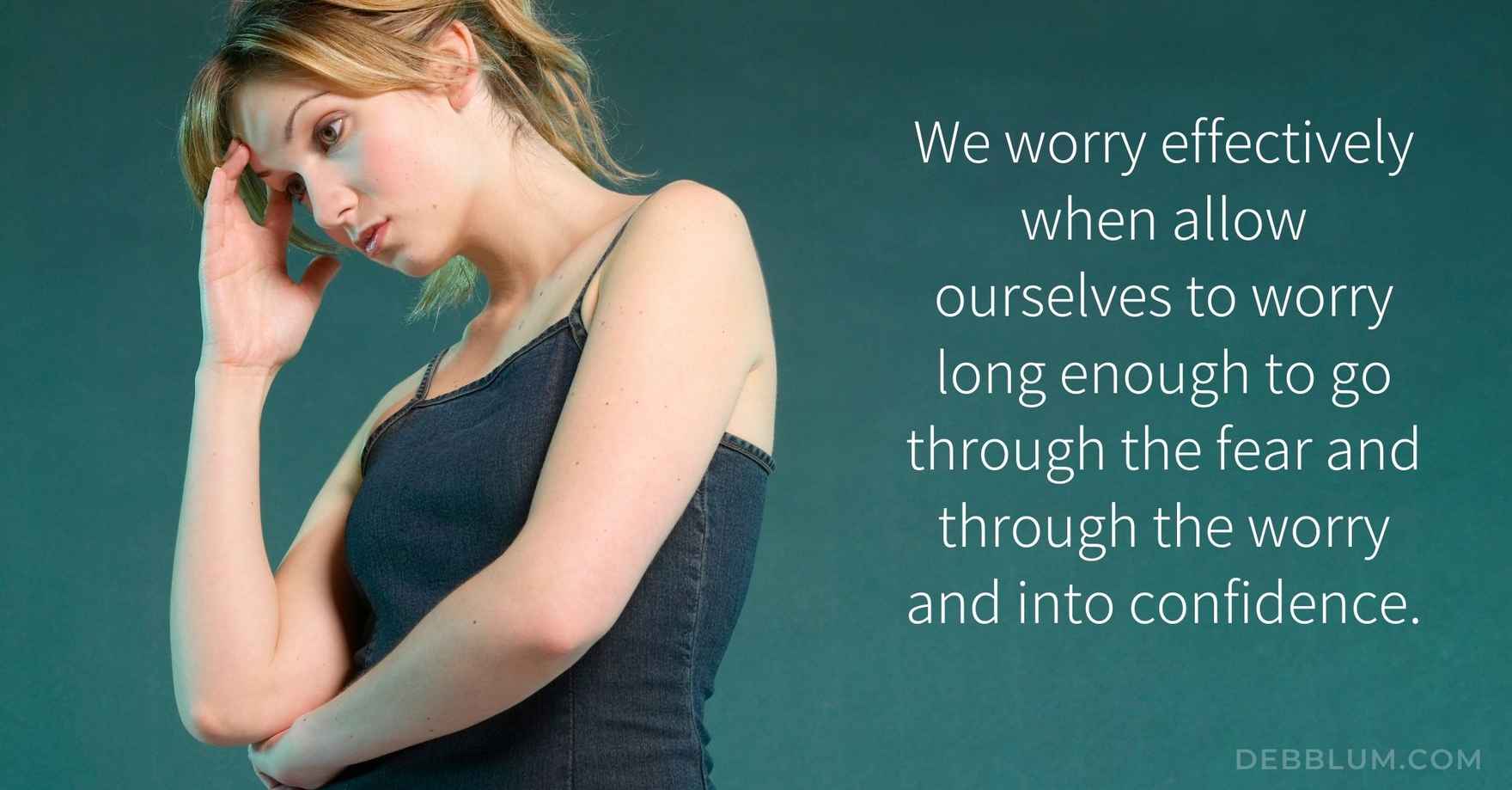 By default, if you’re a parent, you worry.

We know in our minds that worrying doesn't help, but that doesn't seem to stop us.

You know how it goes: something happens (your kids are on their iPhones too much) and you tell yourself a story (this is going to be a problem) and then you feel afraid for the future. You go into fear. You play out the possibilities and by the time you're done, you've become the creator of an elaborate story about how their lives are going to be ruined because of the iPhone. We get sucked into the story that our imagination has created and we believe it to be true rather than what it is…just a story based on a single thought that might not even be true (this is going to be a problem).

Some people would call this future catastrophizing.

“Worry is a misuse of the imagination.” ~ Dan Zadra

Worry is an adaptive survival mechanism that's based in keeping us and our loved ones alive. Our imaginations project into the future and anticipate all of the possible dangers and then our brain does what it can to avoid them or remove them. It serves us well if we're in an actual dangerous situation. And worry can be a catalyst to solve problems for sure! But it can go awry and we can form the habit of worrying and even become addicted to worrying.

I got to wondering - perhaps that we worry isn’t the problem, maybe it’s how we worry.

I think we are “incomplete worriers.” Most of us stop worrying too early and sort of get stuck. We never bring the situation into our full consciousness so we're run by unconscious and irrational fears.

We worry effectively when allow ourselves to worry long enough to go through the fear and through the worry and into confidence.

Yes, you read that right, I said we need to worry longer.

We need to let our worry to play out fully.

Let’s take an example for a parent of a boy who's entering high school this year. Mom's afraid he'll be exposed to drugs and give into the peer pressure, do drugs, get addicted and become a pot-head and never launch.

Most likely she'll stop there and keep playing that worry tape – forming a groove in her brain by going over the same thoughts repeatedly – and this is what forms a worry habit.

She's uncomfortable sitting in this fear, so she begins to think about how she can control her outside circumstances to solve this problem. She considers that if her son has more activities after school he'll have less time to party. She contemplates what rules need to be in place to prevent him from being out partying too late. She lectures him about the risks of drug use. She tries to establish family traditions and family meals because studies show kids with strong family ties, regular meals, and traditions are less likely to do drugs.

Great ideas! And this shows that worrying can be useful for problem-solving. But nothing guarantees that her son won’t do drugs. If he wants to, he will. Period. And she's still stuck in fear.

Mom is just putting a bandaid on the boo-boo in her heart. She's masking the uncomfortable and painful feelings around her fear of her son getting involved in drugs by trying to fix and control – but it’s really just an illusion of control. Since her son is now in control of his own life, there's very little she can do to control his behaviors.

3 Steps to Worry "Better" So You Can Go Beyond Fear and Into Confidence:

STEP 1. Feel the fear/feelings. Realize that your limbic brain is worried you'll be abandoned, rejected, or die. Or that your child will be, which is like death for you. Let's start by feeling that fear. Soothe and be tender with yourself. Lean into the fear instead of resisting it. Once we've allowed ourselves to feel those feelings and even notice and feel what that feels like in the body, it’s a good time to say to yourself, perhaps with a hand to your heart, that it’s going to be okay. I often remind myself “I am not going to die and it’s going to be okay, we can handle anything.”

STEP 2. Play out the scary story by asking a repetitive question like “and then what happens?”

This allows us to see that even if the worse case scenario happens, we will most likely be able to handle it. We can remind ourselves of times when things have been really hard, but we've survived and made it through.

In addition to asking "and then what happens?" we poke holes in the story we've created by asking:

“What is the likelihood of things turning out that way?”
“What other creative solutions could I find if I were really in this situation?”
“What good is happening in this moment of the story?”
“So, what if that happened? What would we do?”
“Who could help us?”
“How would we handle that situation…could we make it through it? Would we be okay?”
“What would a friend say about this situation?”
“What would we do if the tables were turned?”

STEP 3. Create a "lovely story" which is a positive story about this – the most likely and best-case scenario based on what we know about life. I say that if you are going to use your imagination to make up a story, it might as well be a lovely one!

Allow me to digress from our 9th-grade kid example with a simple example to illustrate this process:

Situation: you walked by a friend who completely ignored you when you said hello. You are worried she is mad at you, did you do something wrong? Why would she do that?

So even if she is mad at you, remind yourself that you'll be okay. Most likely she won’t abandon you, it’s going to be alright. You are safe.

Then we turn things around and we get curious – what might I have done for her to be mad at me? Nothing I can think of, I haven’t even seen her in weeks. If she is mad at me, maybe we could talk about it and work it out. But maybe she isn’t even mad at me. And I am sure I’ve dissed others in the past and probably don’t even know I did it!

The "lovely story" is that she was distracted and didn’t even hear you or see you. That might even cause you to have some compassion for her and wonder if she is okay. Maybe you would even call her to check on her.

Doesn’t that feel better than staying stuck in a story that she ignored you?

Let's use these three steps with the example of a 9th grader and drugs:

First, allow yourself to fully feel the fear.

Accept that you truly are afraid that your child will get hurt or even die if he chooses a path of drugs. Honor how scary that feels and your deep need to protect him. Tell yourself that you are okay and that he is okay. Put your hand on your heart and take a breath. Remember that this is not real, it’s just a worry, just your imagination.

By doing this, you will open up space to consider the possibility that you and your family can survive and even thrive in the face of any crisis your imagination will create and worry about. And that it’s HIGHLY unlikely that most things we worry about will come to reality (research shows that 85% of what we worry about never happens).

Next, it’s time to play out the story and poke holes in it.

We’ll play this out with the intention of seeing that you can survive even the worst thing your imagination can create in this situation – that he DOES get addicted to drugs.

First, you come together as a family and talk it out – you realize that it’s nice to talk it over with him openly and you appreciate that he is talking openly to you. In fact, you feel connected to him and haven’t felt that way in a while.

You're worried and he's worried – you notice that he's grown up a lot and really is a sweet and loving kid. You can tell that he feels relieved to be talking to you and not facing this all alone. He even hugs you and thanks you.

You consider your options together – you notice that you're actually doing okay, you're surviving this “crisis” and somehow you are coming together as a family. Over the next few weeks, you notice that he hasn’t been partying with his friends and instead is hanging around the house and in a much better mood.

You start to get creative as a family and consider options like taking a family sabbatical to Costa Rica for a year or maybe a rehab facility that feels really right for him and has great outcomes – you decide to go to Costa Rica and can’t believe that you'll be spending a year there. You're excited and feel curious how something so bad might be turning out to be so amazing for your family!

You work with a counselor while there and your son is doing great – in fact, better than ever. You discuss how to transition back home and you realize you have come along way – you survived!

This may seem unlikely – that it’s pretty fantastical to imagine it going this well. But the truth is, it doesn’t matter. There is an 85% chance that what you're worried about will never become reality anyway. It’s just a made-up story either way.

Finally, we create a lovely story to focus on.

“My son goes to high school and experiments a little with drugs, drinks a little more than he should, parties more than I prefer, graduates and gets into a great college, parties some more, begins to grow into the man I always hoped and knew he would be, gets a great job, and is living a pretty normal life.”

Not totally out of the question, right? The odds are in his favor for sure.

Can you see how this process brings clarity and resolution? We first honor the fear you're feeling and second, walk through a scenario that's scary but focuses on how you would handle it and that you CAN handle it. It helps us to feel our feelings and then get confident that perhaps we can allow life to happen and face circumstances as they come up rather than trying to change things to fit how we want the world to be. This is the basic premise behind mindfulness.

Trust yourself. You can handle anything. It sets us up to treat life is an adventure rather than something to be afraid of.

And then, with the lovely story, if you focus on what you want to happen instead of what you don’t want to happen, you'll more likely have a positive outcome. The truth is, what we resist persists. And what we focus on grows. If nothing else, you'll feel better and you can still feel like you're focusing on the thing you're worried about, but perhaps with an intention for a better outcome.

“Do not anticipate trouble, or worry about what may never happen. Keep in the sunlight.” ~Benjamin Franklin

If you are going to worry anyway, why not learn to worry better?

Are you a worrier? Do you have tips for how you have learned to manage your worry? Please comment below!

There are no comments yet. Be the first one to leave a comment!