How I Moved Beyond My Fear of Criticism 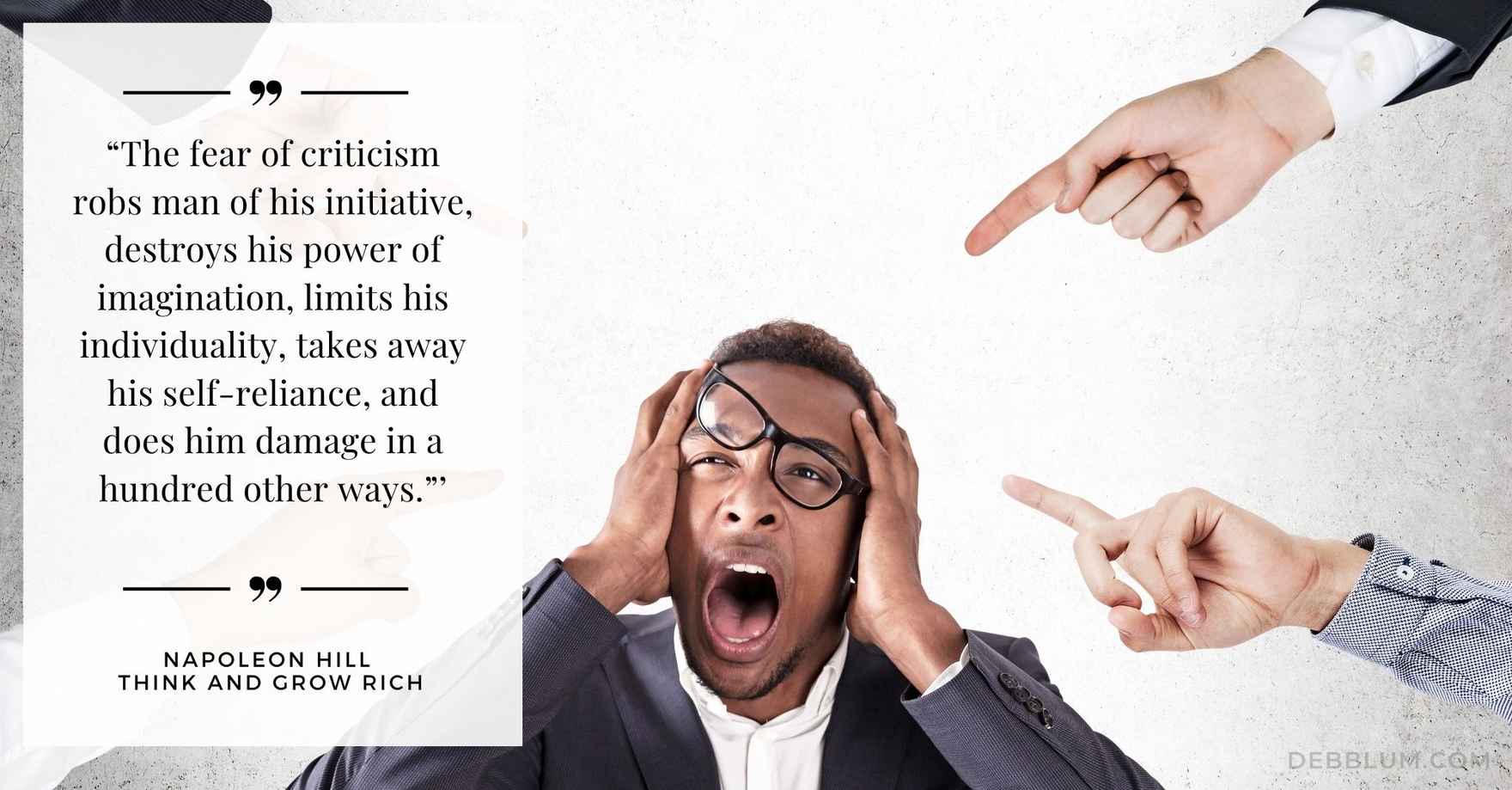 How do you feel about criticism? Do you do everything you can do avoid it? Does your fear of criticism hold you back from being your true self?

“Be who you are and say what you feel, because those who mind don’t matter and those who matter don’t mind.” ~Dr. Seuss

For as long as I can remember, I lived in my own make-believe world where I believed that if I was “perfect” in my actions, no one would criticize me. I was convinced that I was doing everything “right” therefore I was protected. In some ways, I learned how to be a chameleon – to act in different ways with different people that I “guessed” would make them like me more. When I think of that right now, it makes my heart race just a little bit faster than usual. It makes me a little anxious to imagine that I was so afraid of criticism, that I overcompensated in my actions at the expense of what is really important in life – connection, love, compassion, open-heartedness. Don’t get me wrong, I accomplished so much when I was over-achieving and over-doing and a great deal of the skills I learned then transfer beautifully into my coaching and owning a business. However, I am grateful that I realized this at 40 instead of 60, 80, or never.

For many people (including me for the first 40 years of my life), fear of criticism results in holding back, not taking risks, not showing their greatness, being overly defensive, and/or not speaking up with their thoughts.

The general theme is that people are afraid to be REAL.

Often, we're critical of others (aka projection), and as a result, we fear that others are judging and criticizing us. Therefore, we're so afraid of fully expressing ourselves.

Working hard to make sure that no one criticizes us is just plain silly.

First, it is exhausting and takes energy away from more important areas in your life.

Second, generally speaking, there is no “right” way, just each individual’s way.

Last, ummm, people are criticizing you anyway….maybe just not to your face. Of course, they do. They did in the past, they do now, and they will forever.

So, what I've learned is that I've been deluding myself by thinking that I could ever avoid criticism.

The work is in the realization that each of us is a unique and beautiful creation with our own skills and talents. And that not everyone will like us or what we have to say.

And that you won’t die if someone criticizes you.

It’s actually more damaging to worry about being criticized than to actually be criticized. It goes back to one of my blog posts about love – about loving with your mind (ego) vs. your heart (spirit or soul or inner truth). It applies here too. Your mind believes its job is to protect you – it alerts you to potential danger. Your mind then creates a fantasy world that convinces you that as long as no one is saying anything to you, not criticizing you to your face, then you've avoided being criticized. That, we know, is wrong. Nonetheless, there are many of us who live that way.

Sometimes we need to ask our egos to sit down and listen to our inner truth.

“You were born an original. Don’t die a copy.” ~John Mason

Let's get real - people will and do criticize you.

In his classic book, ‘Think And Grow Rich,’ Napoleon Hill discusses the fear of criticism. “The fear of criticism robs man of his initiative, destroys his power of imagination, limits his individuality, takes away his self-reliance, and does him damage in a hundred other ways.”

I think criticism is a waste of words and time and usually results in hurt feelings.

I don’t recommend it.

However, if you can find space to hear criticism in your life, sometimes, even when delivered harshly, it can help you grow. Try to listen to the message not the tone. When someone criticizes you, you can choose whether to take it to heart or let it “roll off your back.” That's your choice. Accepting criticism with grace takes work, no doubt.

When you learn how to hear criticism, evaluate it and then decide whether to internalize it or trash it – you strengthen your commitment to living YOUR authentic life. You take charge, take back your power, and live in reality rather than living in a state of denial.

You can do this! It’s a choice that you are free to make.

“We are so accustomed to disguise ourselves to others that in the end we become disguised to ourselves.” ~François Duc de La Rochefoucauld

What I learned as I moved beyond my fear of criticism:

And remember, most people criticize in others that which they're afraid is true about or that they judge about themselves.

As my family likes to say "your opinion of me is none of my business." ;) Put another way, what another person says about YOU tells you more about them than it does about you.

“He who trims himself to suit everyone will soon whittle himself away.” ~Raymond Hull

I can teach, and show you the road, but I cannot carry you on the path towards self-love and authenticity. You must walk the walk, climb your own mountain. But if you want to go with me, and other women on the path, you may want to check out Self-Love Basecamp.

There are no comments yet. Be the first one to leave a comment!